If you want a pokie with a hint of something new, but you don’t need them to be more difficult than your Year 12 exams, then the Balloonies pokie is just what you need. It offers a healthy dose of fun.

How to Play Balloonies Pokie

The Balloonies pokie from IGT offers 5 reels and 20 paylines. When you play this game, you will be betting on all the paylines, so don’t worry about that too much. The minimum bet on this machine is 20 cents. The maximum you can part with per spin is $60. Good spread of bets, if we do say so.

Once you boot up this game, you will instantly realise why this game is called ‘Balloonies’. It is because it features…balloons. Not just any balloons, these are balloons in the shape of an animal. The designs are gorgeous too, although we can’t help but feel one of the intentions of this design was to pull in the Facebook crowd.

We really do love the theme, because the game does live up to its name. It functions like a balloon. These balloons flow away, they pop, and, well that is all that a balloon does. If we have one complaint about the game, it is the irritating soundtrack. That is what the mute button was invented for, however.

The game has been designed to be simple to understand. This is because IGT knows that this is the type of game that is going to be pulling in newer pokie machine players. However, don’t worry, it is not so simple that experienced players won’t get anything out of it. We have been playing slot machines daily for years, and we must say that we still get a lot of fun out of Balloonies!

So, let’s discuss the Floating Reels feature first. If you have played slot machines before, then you may have encountered something known as ‘rolling reels’. So, when you are lucky enough to score a win, the symbols that form the winning combination disappear and new ones fall into place. The Floating Reels feature is the reverse of that. Instead of the symbols falling into place, they will float upwards…like balloons. The balloons that formed the original combination will pop, just for effect!

The second feature is a star symbol. This is where the big wins can be found. The star feature acts as a multiplier. It can be a 2x, 3x or 5x multiplier. You will also be given a cash prize of double your line bet when it appears. The really awesome thing is that up to two can appear on the reels at once. The multiplier will be added together here, which can give you a maximum multiplier of 10x.

The last feature comes in the form of free spins. This occurs when you get three red balloons anywhere on the reels. When these appear, the balloons will pop. You will then be awarded up to 12 free spins. The features that we covered already will still appear during these free spins, which is nifty! 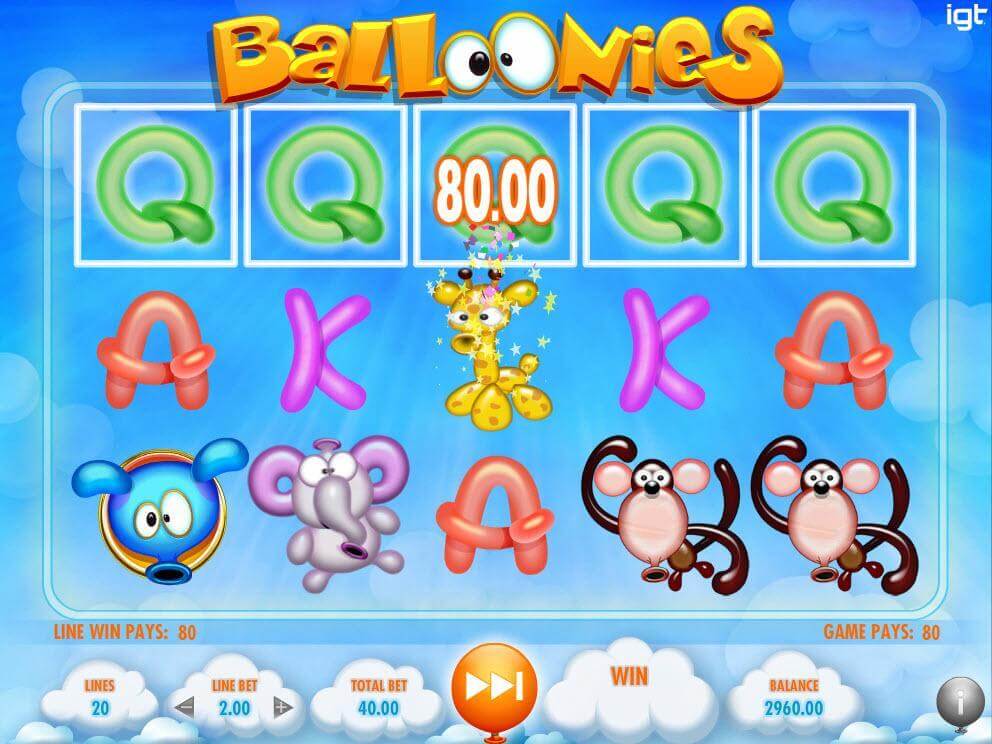 When it comes to mobile pokies, the Balloonies mobile pokie is up there with the best of them. It is a game which has been designed well from the outset, and we are hard to please when it comes to mobile games. This is because mobile gaming is, in the grand scheme of things, very new. Companies have not quite cracked it. Seems like IGT have managed with their pokies, however.

The Balloonies pokie strives to be different. However, it does not act so different than the machine is complicated and uninteresting. You won’t even need to dive into the instructions of this machine to understand what is going on.

We must say, this is not only one of the most fun IGT pokies that we have played in recent years, it is one of the best pokies full stop. You can play the Balloonies pokie on any website which offers IGT games. They can be a little tricky to find, so we have done a nice thing and collected a list of some of the best IGT casino websites around, just so you know the best places to head!

Where To Play Baloonies Pokies