There are 10,000 levels to work your way through in the Viking Runecraft pokies. It is a long slog which will take days, if not weeks, of spinning the reels. With a $500,000 jackpot at stake, it is completely worth it.

How to Play Viking Runecraft Pokies

The Viking Runecraft pokies was released in April 2017. It is a video pokies with 6 reels. The slot plays ‘all ways’. The house edge is 3.3%. It is medium to high volatility. The minimum bet is 10p per spin. The maximum is £100. The jackpot available increases as you work your way through the levels of the game. The maximum is $500,000.

We must say, Viking Runecraft looks tremendously good. The team at Play N’ Go have put a ton of effort into ensuring that the graphics look as remarkable as possible. Couple this with an awesome soundtrack and from a theming standpoint we can’t see anything wrong with it. As you will discover in the next section, this is a pokies which has been built to be one of the last pokies you ever play. This is because there are 10,000 levels in it.

The more you play, the higher you creep up those levels (it saves your progress). There are a few more complicated features built into it, but nothing that is going to completely blow your mind. That being said, we feel that this is probably a better pokies for more experienced players due to the way that it plays.

As you play this game, you will start to climb up the levels. You climb up levels as you form certain combinations. As you go up the levels, the prize available will get a little higher. The game saves your progress providing you stick on the same pokies site. There are four randomly triggered features in this pokies. Each time you go up a level, the random feature changes. These are:

As you go through the levels, you will collect runes. As you go up a level, the runes that you collect will be put onto a reel. You can then spin the reel. If it lands on the rune, you get a cash bonus. Whenever you get a win on the reels, the Charge of Destruction (a little reel to the left of the pokies) will light up. If you are lucky enough to net a win on 20 symbols, you will get one of four features:

Free Spins: On top of this, you get free spins. To trigger this, you need a win of 40 symbols. If there is no win, you will get one of the four features on the charge of destruction. You will keep playing until all four of the features have been triggered. This makes this feature very lucrative. There will also be a multiplier reel in place. It will be between 2x and 15x depending on how many wins in a row you net yourself. 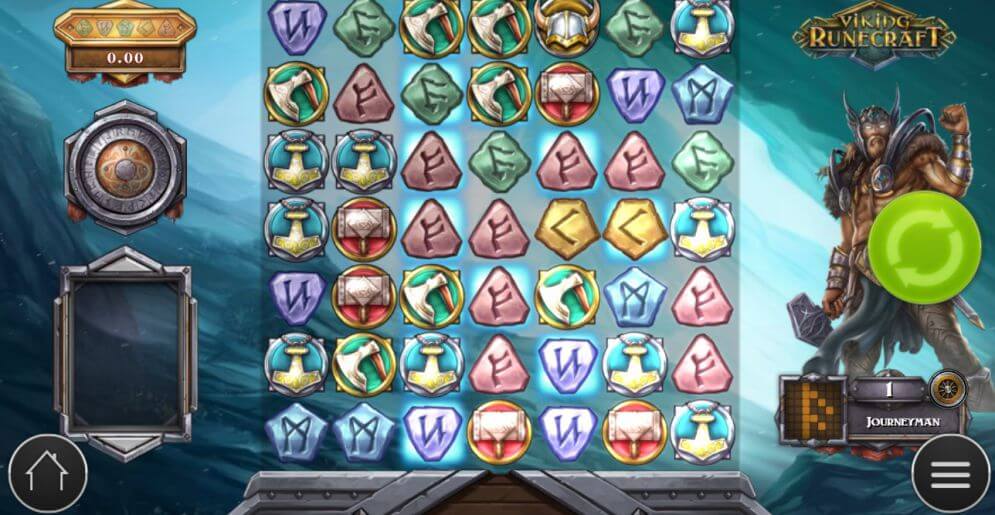 Since this game is going to be a major time sink if you are looking to work your way through all 10,000 levels, we are willing to bet that you will be playing it on your mobile device a lot. Thankfully, this is a game which works exceedingly well on mobile devices. It looks fabulous and the gameplay is incredibly smooth. Play N’ Go really have done a top-notch job with the Viking Runecraft mobile pokies.

Viking Runecraft Pokies is a game which is going to take a lot of patience to get anything out of it. This is not a pokies that you can just play every now and then. If you really want to win the top amount on this pokies, you will need to play it repeatedly. It is fun the whole way through, though.

To play Viking Runecraft, you are going to need to track down a pokies casino site which offers Play N’ Go games. Thankfully, these are not going to be difficult to find in the slightest! If you need a nudge in the right direction when it comes to quality pokies sites, however, then all you need to do is check out the list below that the team here at All Pokies Sites have put together.

Top Casinos Where You Can Play Viking Runecraft Pokies